This is a story of a lawyer with a successful law firm who found himself faced with a diagnose of cancer and later his business partner burned out – all during the summer of 2011.

This story is true, and I have been encouraged to tell it by Niels himself. He believes it could be inspiring for others who are new to GTD or just curious about it.

In late winter of 2011 I received a phone call from Niels. He had found me on the internet, and was interested in GTD, and asked me if I could speak at a conference he and his partner was setting up the coming fall. I said yes – that I was. After a month or so Niels called me out of the blue and asked if I could coach him in GTD. He had read more about GTD, and was intrigued and felt the need to learn more.

We started our sessions, and Niels was a fast learner. He got the basics of the methodology down fairly fast, and we did a brain dump and built his project and context structure together in OmniFocus. Little did we now that soon another context was coming towards him – «hospital bed».

After practicing GTD for about two months Niels received the news in May 2011: that he had a malignant tumor that needed to be removed by surgery. He was admitted shortly after and had the cancer removed.

He has recalled his awakening in the post-op and the weeks after to me, and I have tried as accurately as I can to re-tell it.

“I woke up every morning and grabbed my iPad and opened OmniFocus to see what I had planned for the day. From my sick bed I ran the company with confidence that I was doing the most important actions every day based on priority, time available and strength.

At first I worked for only a few minutes. Later more. But every day I let my decisions the day before dictate what I was to do today. It felt really good to tick actions of as done, and it kept me focused on productive thoughts. Eventually I got out of the hospital and started, slowly by slowly, going back to the office. I used the same strategy there. Decide and do.

Later in the summer my partner burned out and went on a long sick leave. I was still recovering from the surgery, but kept calm in that I had perspective and control and that I knew what needed to be done. With the help of my wife and a secretary, who was asked to come back earlier than anticipated from her pregnancy leave, I managed to keep our clients happy and the business afloat.

Now my partner is back in shape and learning GTD too. I am eager to charge new challenges and see what we can achieve in the years ahead. The future is looking good for us.

Thank you David Allen for GTD and OmniGroup for OmniFocus. You saved my business!

Niels is not my clients real name, and some of the events has been slightly altered to protect my client’s privacy.

I hope you have been inspired reading this as much as I have being a part of Niels’s journey.

3 hendelser på “How GTD and OmniFocus saved my business” 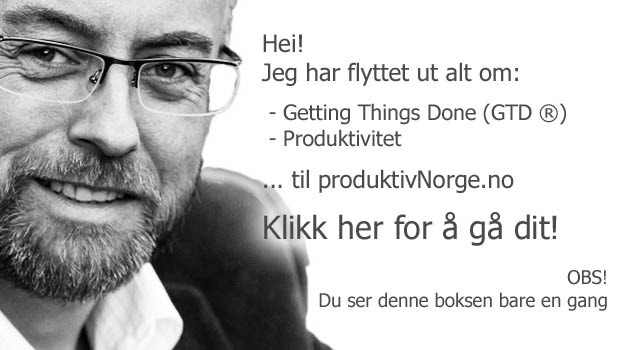